DEARBORN, Mich., July 10 – Ford Motor Company will take its 10 years of hydrogen research expertise to the Bonneville Salt Flats in August in an attempt to set the world land speed record in a hydrogen fuel cell powered Ford Fusion.

"Racing is part of Ford Motor Company's DNA so it seemed only natural for us to build a fuel cell race car that runs on hydrogen, a fuel that could someday play a key role in meeting the energy needs of the transportation sector," said Gerhard Schmidt, vice president, Research & Advanced Engineering for Ford Motor Company. "Our goal in attempting this record is to further expand our technological horizons with fuel cell powered vehicles. The collaboration with Ohio State University also affords us an opportunity to work closely with a prestigious university, which provides out-of-the-box thinking from student engineers and helps us recruit talented young people to work at Ford Motor Company."

The land speed record attempt will take place during Bonneville Speed Week from Aug. 10-17. The attempt will be sanctioned by the Southern California Timing Association®.

The Ford Fusion Hydrogen 999 land speed record vehicle was designed by Ford engineers and fabricated and built by Roush in Allen Park, Michigan. Ohio State students are providing the design of the 770 hp electric motor, while Ballard is supplying the hydrogen fuel cells. Ford retiree Rick Byrnes, a veteran Bonneville racer, will pilot the Ford Fusion Hydrogen 999 car on its record attempt.

Hydrogen Part of a Broader Effort
Ford's strategy for alternative fuels is built around multiple technologies, including hydrogen fuel cells. This flexible approach allows the company to meet goals for customer needs, environmental impact and shareholder interests. The strategy does not focus on one catch-all solution but includes a flexible array of options, including hybrids, E85 ethanol, clean diesels, bio-diesels, advanced engine and transmission technologies and hydrogen fuel cells.

The company already has a fleet of 30 hydrogen powered Focus fuel cell vehicles on the road as part of a worldwide, seven-city program to conduct real world testing of fuel cell technology. The 30-car fleet has accumulated more than 540,000 miles since its inception in 2005.

Currently, Ford offers gasoline-electric hybrids including the Escape Hybrid and Mercury Mariner Hybrid. The company will also offer hybrid versions of the Ford Fusion and Mercury Milan in 2008. 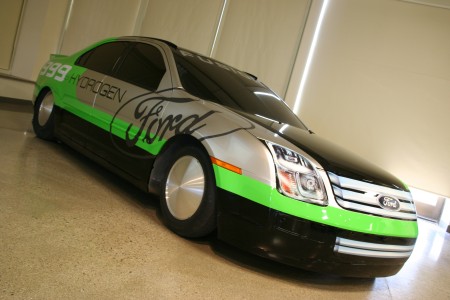