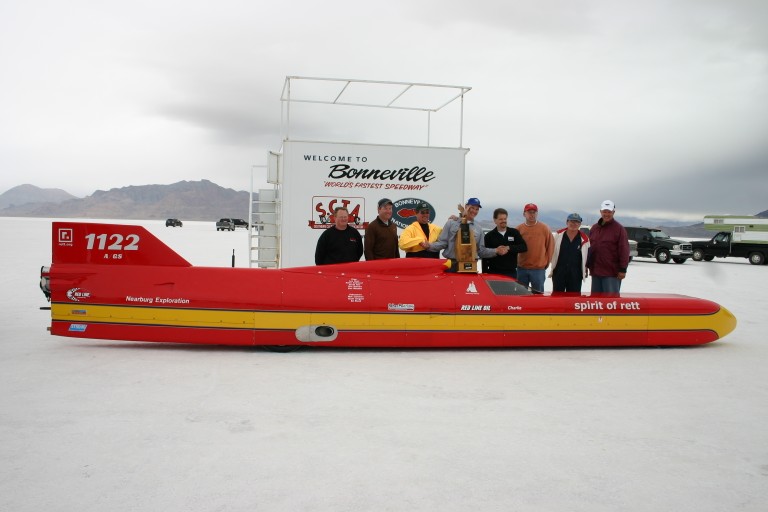 Meet officially called due to weather and conditions are deteriorating fast.

Official word right is if wind does not calm down by 12:30PM the meet will be called. There is a nasty storm coming this way with high winds, heavy rain and lightning in Elko at the moment and coming this way.

We have been on wind hold for about 2 hours now. They were letting vehicles run short course only for a bit due to 20 mph side winds on far end. Weather seems to be getting worse, lots of clouds rolling across the mountains. And it's damn cold. SCTA-BNI has picked up most everything except on long course area for running. There is about 15 vehicles in line wanting to run just waiting on wind.

Even though high winds in Wendover, just a breeze with occasional gust of winds on the salt. They are still running, combining short and long course to the long course. There is just a handfull of people here still running. The Spal Pickup guys are getting my vote for Dedicated Racer Award for the meet. Cold temps and the wind that come up these guys have the front end off the truck and swapping motors. They are a determined group of racers. There have been talk today that it may be the last day of racing. NOT until the meet director call's the meet, but there has been talk about it.

Temps cold and getting getting colder. High winds thru the night and into the morning. Sustained 15-20 mph and gusts as high as 30 mph. A few rain drops here and there. Haven't made my way to the salt yet, still drumming up enough courage to go outside at the moment, just looks nasty.

I would like to thank Clay Taylor for all the high speed photography from yesterday. He did an outstanding job and excellent pictures.

Because of weather coming in record returns started at 4 pm but weren’t very productive. All runs were facing a 9 mph headwind.

- Paul Livingston had a down run of 194.9 mph on a 191 mph record in the MPS-G class and backed up at 187 mph. this will be a close record, will have to wait for official results.

- Salty Dog Racing with John Rank driving backed up at 272 mph with his 274 mph qualifier in AA/GMR. He upped this record to 271.3 mph this morning

- Charles Nearburg changed classes and went for the A/FS Nish-Vesco record of 344 mph qualified at 349 mph, they made a quick turnaround and went 347.4 mph enough for the record.

That is close to it for record returns. The Vesco #444 car made another pass at 296 mph, just can’t get it over that 300 mph mark yet. Leo Hess made another pass in the motorcycle liner and went 211 mph and stayed upright the whole run. They are fighting some electric gremlins right now. How many times have we heard that phrase? Ohio State University made a pass at 223 mph earlier today, made another pass at 218 mph in middle mile and slowed in last mile.

Record return runs for today are towing up to the line, because of weather moving in stay tuned. Right now there seems to be about a 7-10 mph headwind. Im all over these return runs so once they start going i'll be updating.

In the mean time take a look at the fastest naturally aspirated bike anywhere at 228+ mph.
Forstall/Deluca entry in the APS-G 1650cc bike.

Kent Riches made a pass looking for a 300 mph run but threw a rod in the middle mile. Ohio State Bukeye Bullett 2 Fuel Cell streamliner went 223 mph on first full pass. Charles Neurburg received entrace into the 300 mph Chapter of the 200 Club. Robert Steele JR qualified again at 201 mph in APS-G 1000cc, he had a failed return this morning. Randall Parker requalified the 1000 PP bike at 195 and change, Moto Guzzi guys failed to show up at the event for the showdown in that class. They expressed they left some more in their bike for this event? Aaron Wilson qualified his Nitro Buell at 205 mph in the APS-PF 1650cc class.

Great day for some on returns others had their problems. Ihave only the long course returns so far. Me having the AM 1610 Station up is like you viewers watching the site. Ron does an outstanding job in keeping everybody as well as me informed on the speeds and estimated averages.

- Mark Deluca not only yesterday became the fastest naturally aspirated bike at 223 mph but today returned just as fast, they went 228.989 just sounding crisp as hell during the run. They also showed over 230 mph on GPS.

- Team Johnson with the Saltosaurus qualified at 274 mph and returned at 272 mph and ended out in the mud past the 8 mile. Should be a good record in the C/GL

- Clark/Hall/Smith/Leggitt AA/BGL went down yesterday at 316 mph on their own 309 mph World of Speed record came back at 314 mph.

- Ro Yale driving Contrivance Special B/GMR went down yesterday at 258.727 mph in the middle mile according to the results and had a mid 240 middle mile and a 251 last mile, not sure on this one.

- Salt Dogs Racing Jon Rank driving went down yesterday at 272 mph and returned at 270 mph in the AA/GMR.

These are unofficial speeds, and I missed a bunch of long course stuff. This is the stuff I got, radio communication went down from the CB at the tower, without that we are blind on everything. I got a lot of video this morning so ill try to compile some of that this morning.